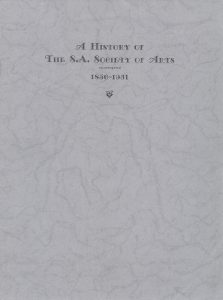 A History of the SA Society of Arts, Inc., 1856 – 1931
Compiled by Mary A Overbury and HE Fuller, Fellows of the Society
Edited by Sir William Sowden
Adelaide, Hassell Press, 1933

A meeting of persons interested in the formation of a society for the promotion of the
fine arts, was held on Wednesday at the Adelaide School of Arts in Pulteney Street. Owing
to the inclemency of the weather, very few persons were present. Mr Jas. MacGeorge took
the chair. Letters were read from Mr JH Fisher, MLC, Mr S Tomkinson, Mr J
Howard Clark, and Mr CA Wilson, expressing regret at being unable to attend, but giving
general approval of the objects sought to be attained by that meeting. The following resolutions
were passed unanimously: ‘That a Society to be called the SA Society of Arts be now
formed. The annual payment of one guinea shall entitle the subscriber to all the benefits of
membership, consisting in free admission to all lectures, meetings, and exhibitions of the
Society. A donation of painting, sculpture, or other such grant of not less value than £10
sterling, or of £10 in money shall entitle the donor to all the advantages of membership for
life, the Society reserving the right to decline any unsuitable object. The Society to be
governed by a President, two Vice-Presidents, and a Committee of ten members, to be elected
by the Society annually. This meeting requests Mr Hill to secure promises of membership
and to convene a meeting of the members for arranging the operations of the Society as soon
as 50 names are enrolled.’ The meeting then adjourned until the time appointed by the
prior resolution.”